The parashat hashavua (Torah parashah for the week) begins with G-d’s command to the High Priest, Moshe’s brother Aharon:

“When you raise [b’haalot’kha] light in the lamps, they shall be lit so as to illuminate the face of the menorah” (Numbers 8:2).

If you remember that this was a menorah not of candles but of oil lamps, shaped as in the photo, it becomes easier to understand this instruction. The menorah is standing against the wall of the Mishkan, and the oil lamp upon the top of each branch should be situated so that the wick end is toward the front of the menorah, away from the wall. 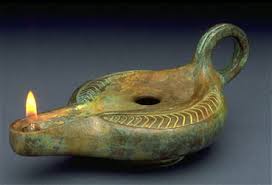 This may simply be good fire-prevention advice, but of course our tradition sees the possibility of deeper meaning in these words. Consider:

The Jewish creation story does not describe a conquering and destroying of darkness in order to create light; rather, light is drawn from the darkness, even as forms are drawn from formlessness. The mystical text Sefer Yetzirah describes creation in this way: “Out of chaos G-d formed substance, making what is not into what is, hewing enormous pillars out of ether that cannot be grasped.”

When we kindle light, as Aharon is commanded to do in this parashah, we then stand in the light that that we have created. To kindle light is to move, quite literally, from darkness into light. As we do so, we are invited to consider the deeper meaning of kindling light –  to step into the light, to see and to be seen. In a Jewish sense, this does not mean that we should try to eradicate the parts of ourselves that are “dark”, but rather that we should try to stay focused on the light and what it shows us.

All the Israelites were in a state of awe at standing in the presence of G-d. There is an old midrash which relates that Aharon was embarrassed that, as High Priest, his job was merely to light the seven lights of the menorah, and that he had not been called to bring a sacrifice as others had at this point in the Torah narrative.

Yet he obeyed: “Thus Aaron did in front of the menorah” (Numbers 8.3); he did not change what he was doing, nor hide. Only after doing his job did he come to see the importance of the light he had kindled for others as well as himself.

It is easy to shrink from light that reveals you. To focus on the light, to fulfill what is expected of one even when one is overwhelmed by the sheer scale of the All in which one participates, is to stand before G-d, revealed as yourself. To be willing to be revealed – to others, to ourselves – is not easy, but that is the command. “Lift up the light toward the face” of the menorah, that the light may enter the sacred space that you share with us. Only after will you see what you are meant to see by that light.

A mystical teaching promises that one who can approach the light in that way, willing to share what the light will show, can be healed and made whole by the act of that lighting. Anyone lighting Shabbat candles with this kavanah (intention) will fulfill the role of the High Priest, and by the kindling evoke Aharon’s lighting of the first Menorah. And then all will be raised up by that light which you have kindled out of yourself, sharing yourself – up, just a bit more than we were before, unto an Upper World of wholeness, and peace.